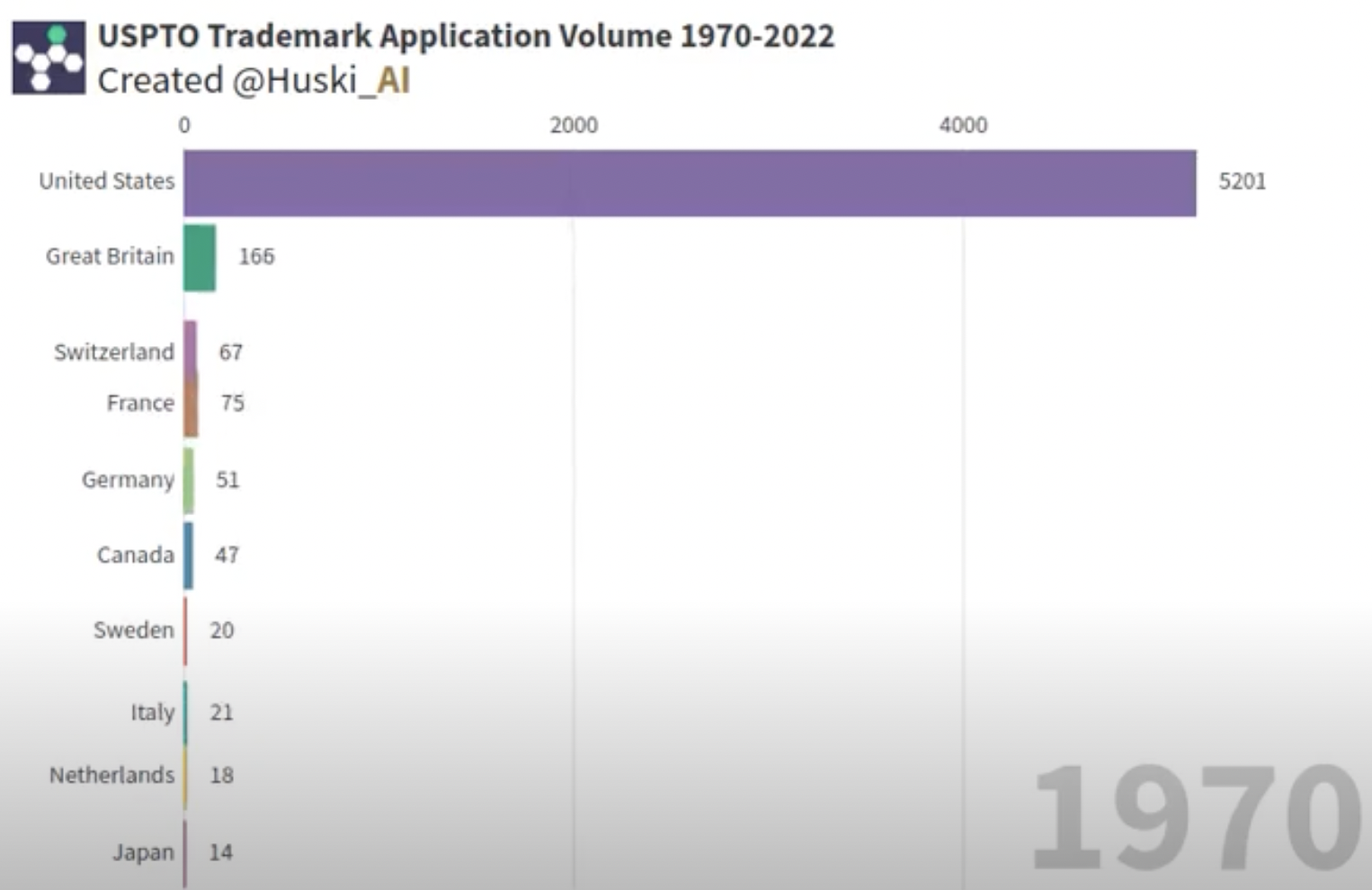 At Huski AI, we’ve been analyzing trademark application data from the United States Patent and Trademark Office (USPTO) and we’ve discovered some interesting insights into which countries are doing business in the United States.

The racing bar chart in the video linked above clearly shows that companies from major European countries, such as Germany, France, and the United Kingdom, have traditionally been the main applicants for US trademarks. These countries have long-standing economic and cultural ties with the United States and have been major players in the global economy for many decades.

However, over the past few years, we’ve seen a significant increase in the number of trademark applications coming from China. This is not surprising, as China has emerged as a major economic power in recent years, and many Chinese companies are eager to enter the US market. In fact, after 2008, Chinese companies have been the major group of foreign trademark applicants in the US. This trend is likely to continue in the future, as China’s economy continues to grow and more Chinese companies look to expand their reach globally.

Another trend that we’ve observed is the increasing number of trademark applications coming from other countries in Asia, such as South Korea and Japan. These countries also have strong economies and are home to many innovative and ambitious companies that are looking to expand their reach in the United States.

In conclusion, the trademark application data from the USPTO provides a unique window into which countries are doing business in the United States. It clearly shows that companies from major European countries have traditionally been the main applicants for US trademarks, but that China has emerged as a major player in recent years. We expect this trend to continue in the future as more companies from around the world look to enter the US market.

HOT POSTS
The Future of Trademark Law Practice Needs AI-Powered Solutions
Innovation to Promote Innovation
Why Low-Volume Trademark Practices MUST Invest in AI
10 Ways For Law Firms to Advertise Their Use of AI to Attract and Retain Clients
5 Reasons Why Top Trademark Lawyers in the US are Embracing AI (and 4 Reasons Not to Be Concerned About Billable Hours)
Maximizing Efficiency and Minimizing Risk - 7 Best Practices in Trademark Clearance Search
Trademark Application Volumes - 50 Years in Review
Trademark Trends - 50 Years in Review
Introducing your Huski.ai Clearance Map

Get the latest articles on all things data delivered straight to your inbox.